Skip to content
Search
Close
I’m halfway into day four here and am settling in somewhat. Firstly, having a driver rather than driving yourself is NOT a hardship! You can’t hop in the car and go somewhere “right this second” but other than that, it is lovely. He drops me at the entrances to places, parks and waits then comes back and scoops me when I call him.
Plus, the traffic here could give New York City a run for it’s money! And the drivers are equally as aggressive. A favorite tactic here is making a left turn from the right hand lane, across two lanes of traffic! Or vice versa. It is unbelievable! I sat a red light yesterday and the car ahead of us stopped, looked, scooted out into the intersection to wait for a car in the green light lane to go through then proceeded to drive on through himself!
I am still not accustomed, nor will I ever be, to the Ramadan schedule. For background, it is a religious holiday that lasts a month and it moves backward 11 days every year. This year it started June 28 and runs until July 28. A key piece of this is that people fast from just before sun rise to just past sunset. In July here that makes it 15 hours of fasting…and yes, that includes no water!
So, all of the restaurants are closed until it’s time to break fast at 6:30. Also, people don’t do a whole lot during the day as they aren’t taking nourishment so, the break fast period starts at 6:30 and runs for a few hours then all of the stores open around 10 and stay open until about 2. This had me getting photos and a medical test done at 10:30 on Sunday evening and shopping for sheets from 11pm-1am last night. A whole new world for this not late night girl!
Yesterday morning I provisioned my home. That was a trip in many respects. Firstly, I haven’t provisioned a home since I was just out of college. I simply packed and moved things. So it required some thinking to make sure I had at least the most important things. Add to that negotiating a store equal in size to a super walmart but less organized, in an unfamiliar language, using foreign currency and wearing an abaya. I mention the abaya as a factor since I got it caught in the wagon wheel at one point and lost some time getting it out w/out tearing it. I’m sure I provided comic relief to at least a few people! It took me about 3 hours and I’ve already discovered a few things that I have missed. I am certain there will be more as time goes on.
I got a chance to connect w/an American expat yesterday who I have been speaking with for the past few weeks. He is a nice guy and has been here for a while so is really knowledgeable which is helpful.
Today I am scheduled to check out of my hotel and move into my villa. I am looking forward to setting up my home! 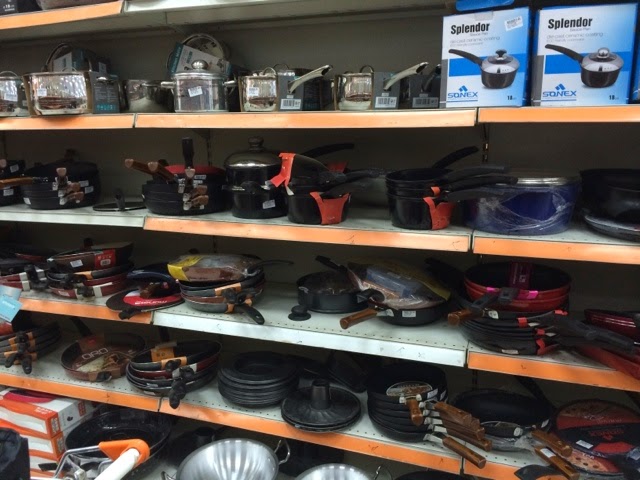 This is one of the more well organzied shelves 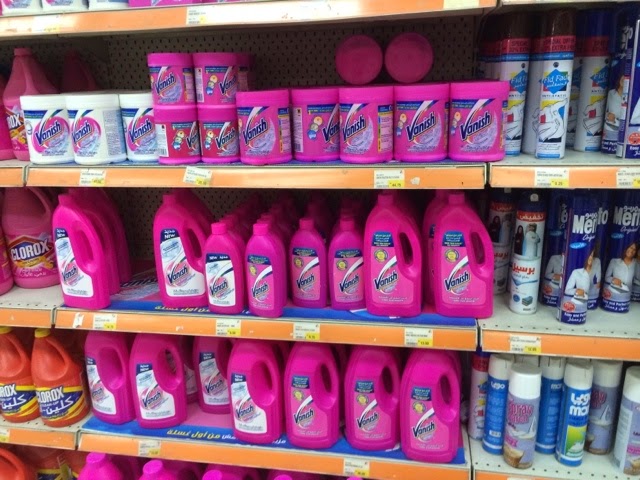