Skip to content
Search
Close
I finally scheduled a hair cut and color in Riyadh! I had it done shortly before I left South Florida but was more than overdue. I was hesitating due to nerves about not being able to find someone who knew how to do my very blond hair. I had dreams of ending up with orange hair or, worse, no hair at all! As I leave for London on Sunday, I decided that, worst case scenario, I could rock a head scarf for a few days and get it remedied there!I googled around for recommendations and found two places that sounded promising. I then spoke with a colleague of mine whose wife is from Canada and she frequents one of the places that I was considering. I thought that was a good sign and booked an appointment at the Mariyah Center.

I was pleased but a bit leery when they had openings the day immediately following my phone call. I made an appointment for 11:30 this morning. This was to be courteous to my driver as I am currently sharing him with a male colleague who hasn’t gotten his vehicle situated yet and he had to be somewhere at 11.  We had an appointment at 10 at the bank to open our accounts and would travel on from there.  The driver arrived at five minutes past ten and my colleague wasn’t ready. So we don’t arrive at the bank until half past ten but I get my account situated by 11. My colleague is still screwing around with his at quarter past so I call to push back my hair appointment. I am now more nervous as they have no problem delaying the appointment by a half hour and, actually, tell me to come whenever. Yikes!

Back to the colleague…he has propped his laptop on the bank employee’s desk (I never once needed my computer for this transaction!) and is filling out a second set of paperwork.  I look at my driver who rolls his eyes and says “I don’t know what takes him so long!” For the life of me I can’t figure out why it is such a process for him but he is now 15 minutes late for work with no end in sight. Apparently he decided to open two bank accounts despite being on shared time. I recommended that he call the staff and say that he would be late and I left with my driver in order to make it to my appointment. Apparently he didn’t make it to work until quite late. I find it embarrassing to be associated with that level of unprofessionalism. I feel that he should have done his second account on his own time rather than mine and especially our client’s but there isn’t much I can do about it but hope I am not associated too closely with his choices. I am pleased that I didn’t wait around for that time wasting operation.

Back to the hair appointment.  My driver had never been to this place and Riyadh doesn’t really have street addresses. You just give directions based on landmarks or used lat/long coordinates on a map.  The Mariyah Center provides this map:

which didn’t do a whole lot for my driver who doesn’t speak much English. I called to get directions but no one there spoke Arabic. So, I mapped it using the lat/long coordinates and showed him the map that had the streets labeled in Arabic. He found it without issue.
The front door was quite pretty, as are many doors here (I will probably end up posting a lot of photos of doors) and the sign outside was amusing. So nice to not have children in a salon. Nothing worse than someone who drags along their child to impose on everybody else’s relaxation time. 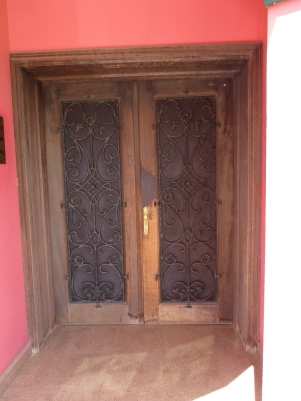 I enter to a modern salon with no customers other than myself in sight. The staff was comprised of Filipino women and they were a stylish and attractive group. I felt much better after seeing them! My stylist was named Dina and I was told she is good with blond dye jobs.  I asked her to match my current color and give my hair a solid trim but follow the lines of the cut as I am pleased with it.
I decided to get a paraffin hand treatment while my hair was cooking and it was a fabulous decision. They slather on a coconut oil lotion and then dip your hands in melted paraffin. They then slip them into plastic bags and padded mitts. It was really warm and soothing but the best part was upon removal.  The woman sets a timer and does a five minute massage on each hand. Divine…for 20 riyals…which is just over 5 USD! Only complaint was I didn’t have them do my feet, as well.
After applying my hair color, the stylist asked if I would like coffee or tea and when I said yes to coffee she offered a cappuccino. I said that sounded lovely and it arrived on a tray with a muffin and a funny weeble wobble sugar shaker. The service here is above and beyond, yet again.

I picked up a gossip magazine to read and laughed a bit as it was from the UK and I didn’t recognize even one person on the cover. Despite that, trashy reading is trashy reading and it was equally as entertaining as it would have been had I know any of them.  I think I most enjoyed the writing as British English is quite different from American English in style and word usage.

Overall, the experience was quite pleasant and the cut and color are as I hoped they would be. I think I have found my salon for the duration of my stay here. To finish an enjoyable morning, the cost of the cut, color, deep conditioning treatment and paraffin for my hands was 475 SR which is the equivalent to $126 USD. Cheaper than home and when I asked about tipping I was told to tip whatever I wanted. I explained that I was new to salon services in Riyadh (new to the country, in fact) and could she recommend an amount or a percentage. She said no, it is whatever I want. I went with 20% and she made big eyes at me so I think I was generous. I tip a lot of people here but am starting to think that it isn’t a “requirement” like it is in the States. It is certainly done but I don’t think so officially.
I am pretty certain that I over tip a lot. People are usually pretty pleased after I tip them. Especially the guys at the grocery markets. But the amount that I give them is not very much and they do a lot of work. I haven’t pushed a grocery wagon more than two or three times since my arrival and I rarely touch the groceries. Guys unload my stuff onto the belt, bag and reload it and then push the wagon to the car and load the bags into the trunk. Sometimes I wave them away as I feel like a chump…but generally I let them do it…it is a nice perk.