Skip to content
Search
Close
Wow! I had another amazing experience in the desert this weekend. About 45 minutes outside of Riyadh is a cave at the base of an escarpment. At the bottom of the cave is an aquifer with crystal clear, cool water. It is absolutely gorgeous!The cave looks like a huge hole into the base of the escarpment, it is a bit daunting until you get closer. When you get close you see that it is pretty steep but not really difficult hiking, it is a series of big boulders that you scramble down. You can see the water shortly after entering and you just pick your route down to it. There isn’t really a trail. The temperature drops dramatically as you get lower and the humidity increases from 7% to noticeable. It feels glorious!When we arrived there were 4 guys splashing around and they were quite friendly. They had limited English and we have virtually no Arabic but through speaking with them we found out that there is a second cavern that you have to go under water and under a ledge to get to.  We put our goggles on and had a swim down for a little recon but it was pretty deep and got dark quickly. Want to go back with a rope and a light for further exploration.  Apparently, based on an article we found after our trip, the cave didn’t always have water in the first cavern, and there are a few more caverns, not just the second one the guys told us about. I am attaching a link to the article at the end, it is written by a man who used scuba gear to go into the caverns. It has some great underwater photos.

We brought a go-pro camera and a soccer ball and had some fun. The soccer ball got rave reviews by a group of guys who came down a bit later. They had some skills and one guy would toss it and the others would jump in and head it or bicycle kick it.  They had a lot of fun. Additionally, we got some fun footage and still photos with the go-pro. It was also cool to go under water with the goggles and explore around. One of the kids in there lost his cell phone (samsung galaxy 5, apparently very expensive) we let him borrow the goggles and have some looks around. It almost became an issue when we were ready to leave, they weren’t prepared to give them back and tried to offer money for them. There was a significant language barrier and they were not pleased. We packed up and moved out.

The walls of the cave are really sharp, sticky rock with a series of incredible horizontal seams running through them. Would make an amazing traverse. I did some of it but was tough without shoes on and I didn’t want wet sneaks.  There were good seems running vertically as well and you could definitely get good gear placements to lead it. But, it is all overhanging and I don’t know what the top looks like. The bottom would be a jug haul, similar in degrees past vertical and big holds to High Exposure in the Gunks.  I would love to have my climbing gear here. So many big walls with nice seams for gear…If only I had known…

Funny moment, I mentioned to my buddy that I wondered if there were any critters in there. We laughed a little and decided nothing worth worrying about. Approximately 20 minutes later, something wraps around my ankle. My knickers go twisted and I scream like a little girl as I swim as fast as I can away from it.  My dramatic reaction works everyone else up and so we are all swimming towards the rocks to get out.  At which point, one of the guys who told us about the ledge that you can swim under, pointed out that someone had tied a rope to the bottom to help you get down and under.  That was what “grabbed” my ankle! You could see it clearly through the water from a higher vantage point but my heart was racing.  I felt a little silly but I really thought it was a critter. Yikes! 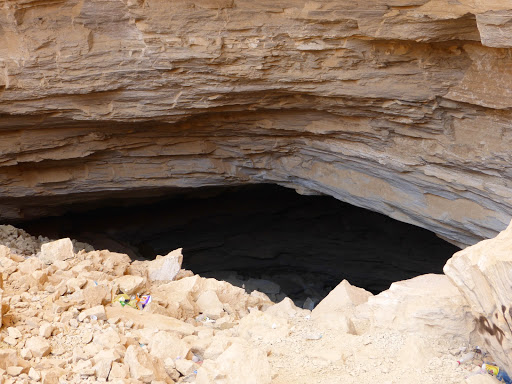 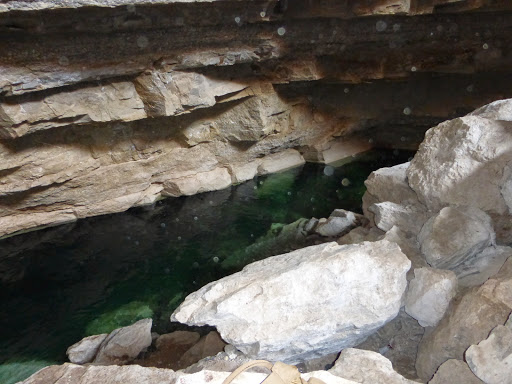 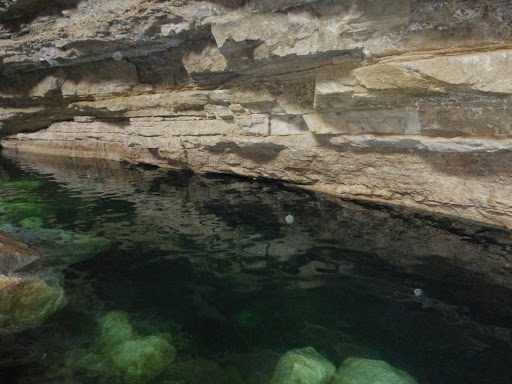 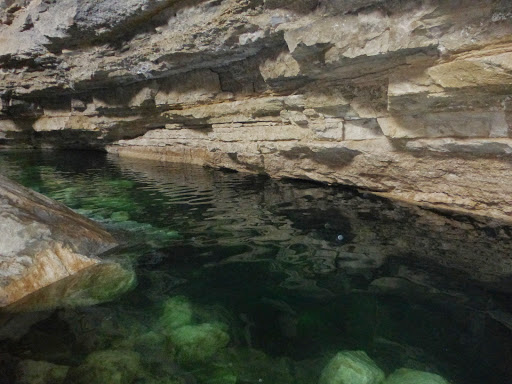 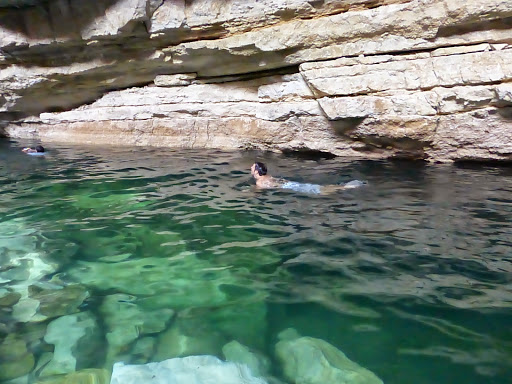 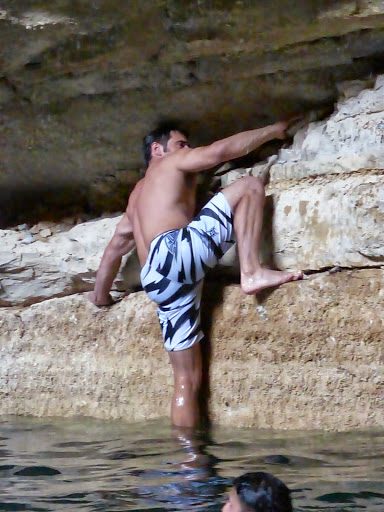 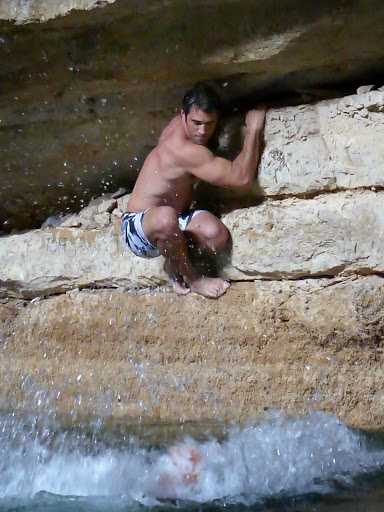 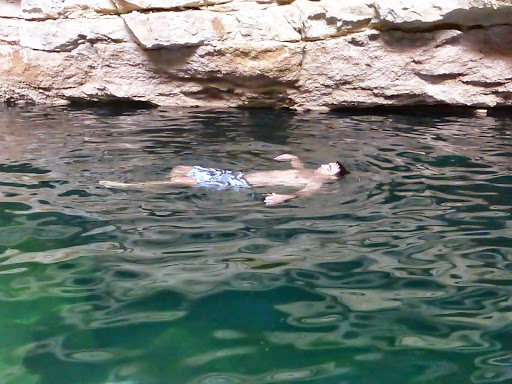 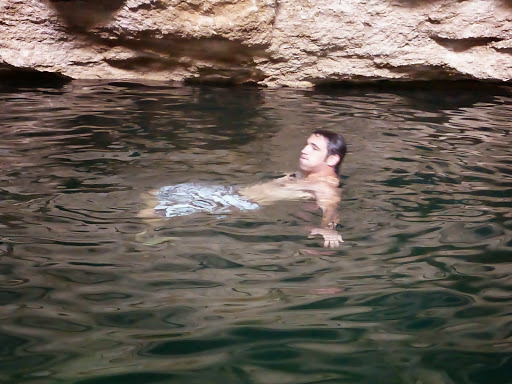 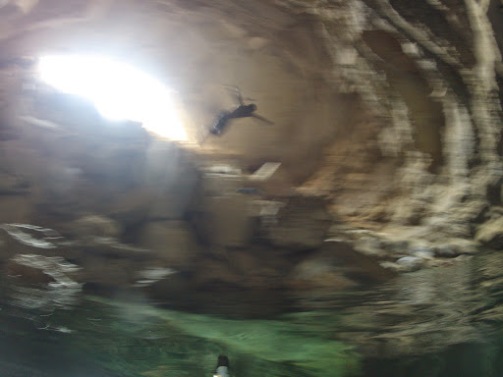 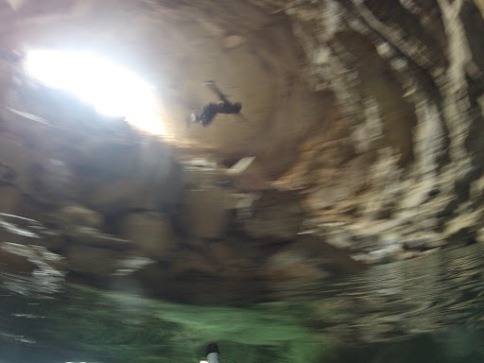 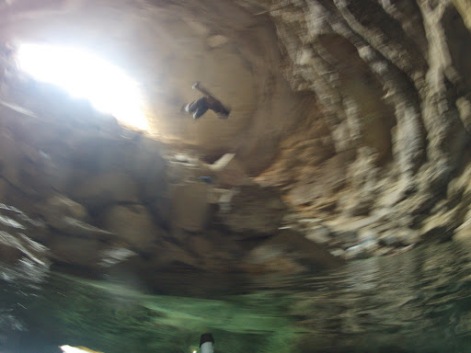 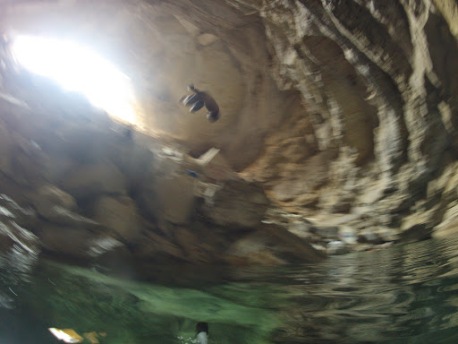 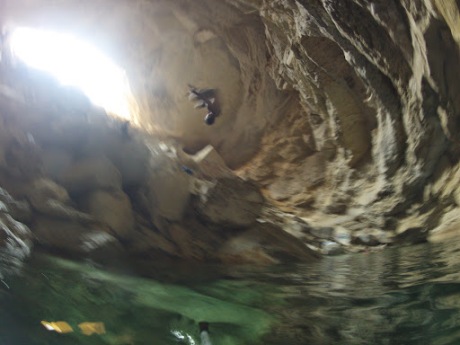 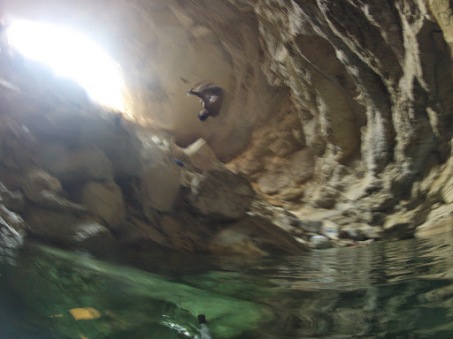 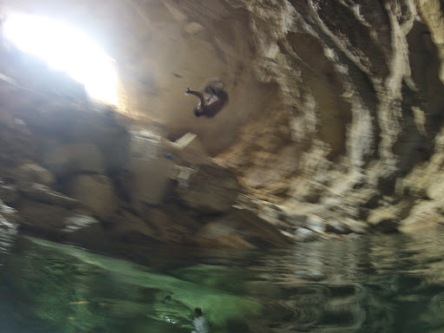 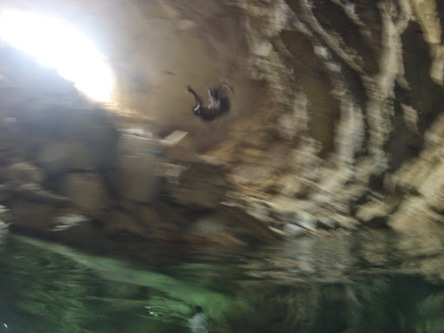 One thought on “Al Heet Cave”