Skip to content
Search
Close
We visited two cities in Serbia, Novi Sad, which is the second largest city in Serbia and home to a university, and Belgrade, the capital city. I didn’t find Belgrade terrifically appealing, it is similar to a large city anywhere and not one of the more beautiful ones. Novi Sad, on the other hand, was lovely. It has the feel of a small town and lovely buildings and outdoor spaces.  The city center has a pedestrian mall area with coffee and ice cream shops, boutique stores and bars. It was great fun to see people strolling outdoors and enjoying the spring sunshine. Doesn’t happen here in the kingdom.
The next few photos are just fun things I saw from our berthing space along the Danube.

The next two photos are of the same pond in Dunavski Park in Novi Sad. They are very similar but I really liked them both and couldn’t decide which one to post. Funny thing is, I don’t know if they appeal to me because they are good photos or because they show water and green, blooming things, both of which are lacking here and that I miss. I didn’t take a photo of the two swans because I don’t much care about them in general and they weren’t in a particularly attractive setting when we saw them but they have a fun story. Apparently there are always, and only, two swans in this park. They are something of a local landmark and are named Isa and Bisa. And have always been named that, despite the fact that “they” have been around long enough that they can’t possibly be the same two swans. They are there for all but about three months in the dead of winter and people get excited to see them back again in the spring. So, we were lucky to get a sighting! 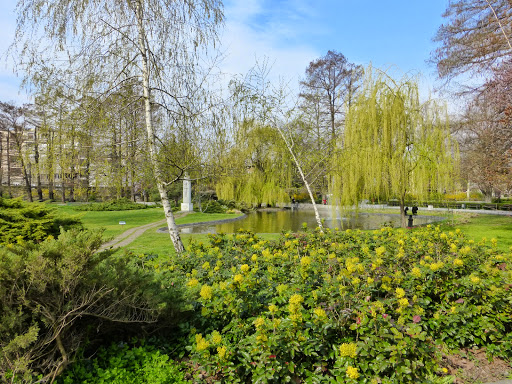 The next two photos are the pedestrian mall in Novi Sad, you can see what a nice area it is on a pleasant day. Lots of cafes with outdoor seating which I have always found appealing.

Funny story about Novi Sad, we stayed in port there until the early morning so I had the opportunity to go out that evening into the city center. The four younger guys from the ship had left the trip early so I didn’t have a partner in crime. My mom wasn’t thrilled but off I went around 10:30 to find a nice local bar. I ended up leaving the ship just as one of the employees was going out for the evening so I walked with him and we had a few beers then headed back to the ship for all aboard time.  As we were walking back, I told him that I was considering knocking my parent’s door.  I would hate to wake them up but I kind of figured my mother probably wasn’t sleeping too well worrying about me so this would make her happy. He laughed a little and said I should probably knock. Well, lo and behold, as we arrived at the ship, I saw my father waiting around in the lobby for me! He said my mother got nervous around all aboard time and wanted him to check on me. I am 37 years old and live in Saudi Arabia…but moms will be moms always, I guess! 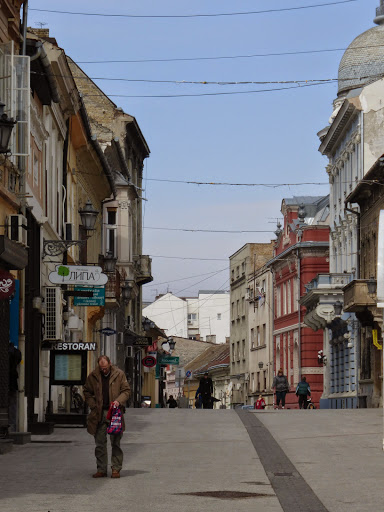 These two are just some examples of the “Stalinist Rococo” style. The communist buildings would be ugly anywhere but when they are neighbors with beautiful European architecture, it is painful.

This building had a strange window shaft running up it and I liked the graffitti within it. The advert was a bit much. 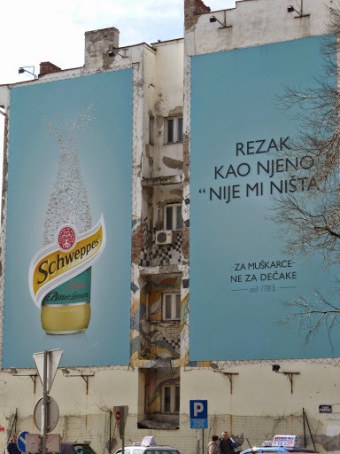 Ok, these two photos were taken in two different places but they connect in a funny way. Firstly, the photo on the left is of a protruding window that is designed so the inhabitant can lean out away from the building to peep at people walking by on the street. I am irritated because it has a special name that loosely translates into “nosy looking” and I can’t remember it. Anyway, many of the buildings still have these and apparently they all used to. The second photo was of a man who needed one of these windows! We walked past a bus with the window recently shattered out and this guy was hanging out his window watching the scene. 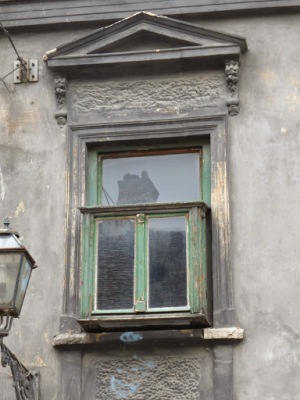 The next group of photos are on the walk through Novi Sad, up to the Petrovaradin Fortress and then down from there. It was set up high on a hill and overlooked the river and the city below it.  An interesting feature is that the hands on the clock face on the tower are reversed, the short hand shows the minutes. It was done so that fisherman on the river could more easily see the hour.

The next photos are from the Belgrade fortress area and Kalemegdan Park. It is considered one of the most beautiful natural lookouts in Belgrade. Unfortunately, I only seem to have taken photos of these lovely bits and none of the fortress…you can clearly see that I was more enthralled with water and blooming, green things than buildings. We have plenty of fortresses and buildings here in Riyadh, we run really short on the natural beauty part.

This statue is called The Pobednik (The Victor) and was built to commemorate Serbia’s victory over the Ottoman and Austro-Hungarian Empire during the Balkan Wars. He holds a falcon and a sword representing spotting threats and countering them. Funny story, apparently the naked thing disturbed some people so when he was planted here he was facing a vast plain and a distant mountain. Now, due to city expansion, he faces a very populated area. I didn’t feel the need to run round and take a front shot, I assume he is anatomically correct based on the detail on his backside and the fact that people were perturbed

The next few photos are from the Church of Saint Sava. Saint Sava was the founder of the Serbian Orthodox Church. This church has been under construction for years. Planning began in 1895 but due to wars, construction didn’t begin until 1935. It then stopped in 1941 for the Axis Invasion of WWII. Construction didn’t resume until 1984. Currently, the outside facade and bells and windows are now complete but the inside is virtually undecorated as of yet.  Scroll all the way down the video, we heard the bells and they are pretty impressive.

Learned that cathedrals have to be the seat of a bishop whereas a basilica has been given special cermonial rights by the pope. So, a basilica is always a basilica but a cathedral can stop being a cathedral if the bishopry is relocated. Often the word cathedral is used for a grand church but that is in error. 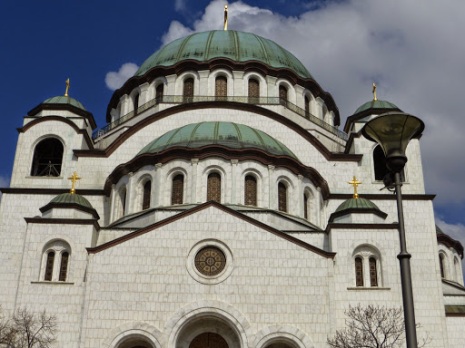 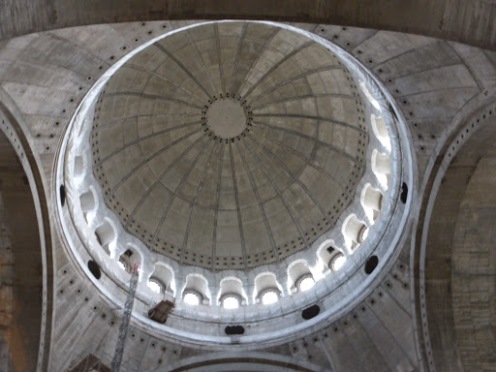 Bells ringing at the Church of Saint Sava.