This post is a bit different. I have been fortunate enough to travel to many different countries and always notice the abundance of fast food American restaurant chains. Saudi has a fair share of them, as well, but what is different here is that the names are often translated into Arabic whereas in most countries they go by the English name.  What I found fascinating was how easy it was to recognize them despite an entirely unfamiliar alphabet. The power of branding blows my mind. Especially as I am not much of a television watcher. I would not have thought that I would recognize so many of them from just their logos. In some cases just the coloring of the signs was enough!

So, my friend and I spent a few hours the other day driving around to take photos of a bunch of them to share with home. At the end of the blog there is a poll, I want to know how well you did and what ones prove to be the most difficult. I have put a few stumpers in there and they aren’t all restaurants so, a few hints: seven of them are not restaurants and six of those are not even food/drink related. I will give a few more hints at the bottom of the Arabic photos but before the English versions if you need a little more help. Also, note that two photos have double logos so will have two answers for a total of 22 to guess.

I will put a large space between the photos and the next hints and then another before the translated signs so you don’t “accidentally” see the answers too soon! 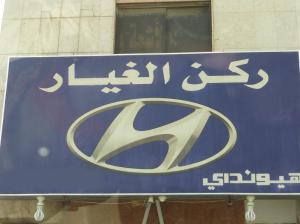 Next hints: six of them have to do with cars in some way, one is a soft drink and one is a hotel.

BEWARE: ANSWERS BELOW! I wasn’t able to take translation photos of four of them but one is so easy that you would have had to live under a rock your entire life to not know it and I think the other three are pretty simple, as well. In case you get stuck, I am reposting the Arabic version of those photos with answer written under it. All except the one…I can’t imagine that anyone (well, at least in any country that has internet to be able to view this post) will not get that one.

And, of course, Colonel Sanders for KFC